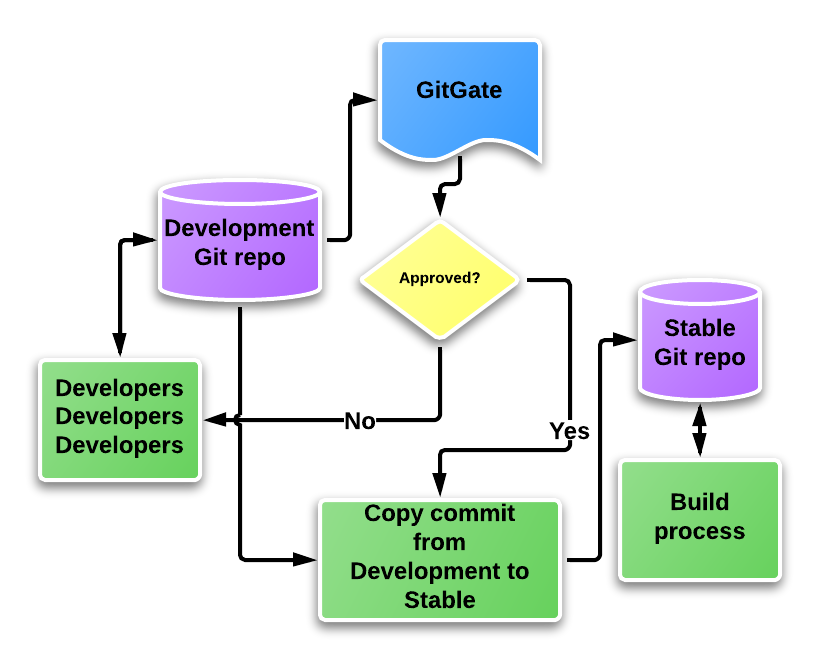 GitGate is a developer-friendly dual-repository code-review system for gatekeeping changes.

GitGate uses two repositories: development and stable. Developers commit to the development repository just like they normally would. Code from development is mirrored into stable by checking out the commit in development and copying it to stable, and committing with -C <commit sha1> to duplicate the Author details.

How does GitGate handle merges?

GitGate copies code from a development repository to a stable repository. Merge conflicts only arise when two commits that include the same file are waiting to be "merged" into the stable repo, and in that case GitGate merges them in the proper order. Because developers use the development repository, merge conflicts are handled prior to getting into GitGate - removing the "code limbo" problems of tools like Gerrit.

This will install GitGate and its requirements from PyPI. GitGate requires Flask >= 0.9, and PeeWee > 2.

Assuming you have a current development repository called swag located on GitHub:

This is the repository your developers work against.

Using the example from Initial Setup.

Navigate to yourhost:5000 and login using the admin credentials created in the Project Creation step.

After fixing server.py in your development checkout, simply commit like so:

This process is generally considered much easier than using Change IDs.

Changes are merged into the stable repository when the following criteria is met:

Merge conflicts should not occur because they are handled at the time the developer pushes to GitGate — it's just like using vanilla Git.

However there is one scenario where things can get out of sync: